Read my blogpost on vegantravel.com about vegan travelling in Skopje, Macedonia.

My boyfriends and I flew with WizzAir from Gothenburg, Sweden to Skopje, Macedonia to start our travels around the Balkans. The flight is only 2hr30 and after a slight 1hr delay we finally landed in Skopje. We stayed in an Airbnb that was art inspired, although it had much potential (see the pictures) with a hidden kitchen behind the TV and beautiful art work, it had much to improve on in terms of cleanliness and lights that did not work!

We took a free walking tour (http://www.freeskopjewalkingtours.com/) to show us around Skopje. We saw the Macedonia Square with the Alexander the Great statue, Stone Bridge, Art Bridge, Fortress, Mother Teresa memorial house (Mother Teresa was born in Skopje), old bazaar, old railway with the clock still showing the time 05:17 when the earthquake hit Skopje in 1963.

We ate in Amigos Restaurant (https://www.amigos.mk/) which was featured on HappyCow, and the staff were very helpful in modifying the menu to being vegan. We had guacamole and nachos, vegetable quesadilla, grilled vegetable salad, the food was good although the vegetables were a little too greasy.

Instead we utilised the kitchen in the Airbnb more than eating out, by cooking vegetable stews filled with beans and lentils for dinner and muesli and fruit for breakfast. 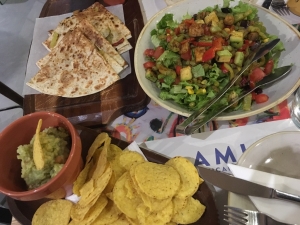